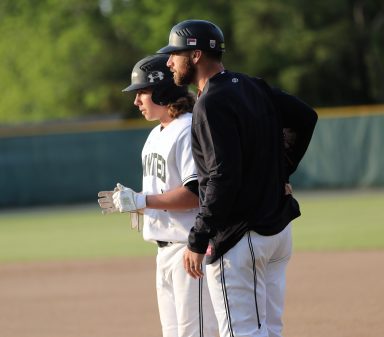 Zach Alexander enters his third season at Manteo, and his first as the head coach.  He comes to Manteo after spending the last six seasons at North Carolina Wesleyan. Alexander served two seasons as a volunteer assistant coach with his alma mater… the first while he completed his degree, and the second while serving as a 5th grade teacher within the Nash/Rocky Mount School system.

In the fall of 2014, Alexander joined NC Wesleyan as a full-time assistant to Intramurals, while in the summer of 2015, his duties moved entirely to the Department of Athletics as Assistant Baseball Coach and Director of Outdoor Facilities.  He was a standout player for head coach Charlie Long at NC Wesleyan from 2008 to 2011.  Coach Alexander was a two-time USA South All-Conference performer at first base.  He led Wesleyan to a pair of conference championships during his playing tenure. After manning the hot corner as a freshman, he made the move over to first base during his sophomore campaign, where he would become a three-year starter. That same 2009 season was highlighted by the Bishops capturing both the USA South regular season and tournament crowns en route to the program’s 21st NCAA berth.

Individually, Alexander posted his best collegiate numbers during a 2010 junior season that saw the Virginia Beach native bat .468 in conference play with a trio of homeruns, 12 doubles and 34
RBIs. Wesleyan capture its second straight regular season league title that year, and for his
efforts, Alexander was named the team’s Most Valuable Player.

Coach Alexander grew up in Virginia Beach, VA and attended Kempsville High School where he played for Coach Paul Shows. Kempsville was the 2007 Beach district champions and Coach Alexander was the Offensive MVP.

Coach Alexander graduated from North Carolina Wesleyan in 2013 with his B.S. in Elementary Education. 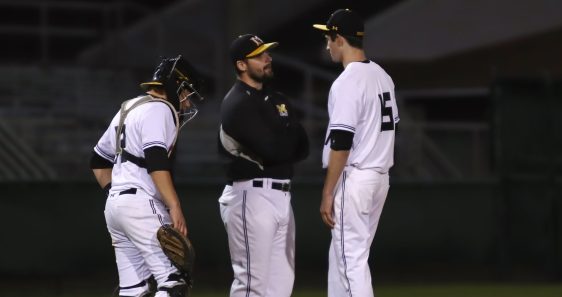 Coach Metzinger enters his eighth year as an assistant coach for the Manteo Redskins. Metzinger is the 2016 North Carolina Baseball Coaches Association Region 1 assistant coach of the year.  Metzinger graduated from Bunn High School where he was an all conference performer in wrestling and baseball. He then signed and played four year of NCAA DII baseball at Barton College. At the college level Metzinger was a closer, first baseman, catcher, and designated hitter.
Metzinger first began his coaching career as the pitching coach for the Wilson Pelicans travel baseball team from 2006-2009.  In 2012 Metzinger became the assistant coach for Nash Central High School under head coach Tony Guzzo, where he worked primarily with the pitchers. At Nash Central he implemented a pitching philosophy that almost halved the total earned runs, decreased walks by 20, and helped to add five wins to the previous year’s total. In 2014 Metzinger became the assistant baseball coach at Manteo.  Also in 2014 Metzinger and Wheeler began coaching the Dare County Hammerheads legion team.  Coach Metzinger is also the Head Wrestling Coach and Assistant Athletic Director at MHS.
Metzinger graduated from Barton College in 2009 with a B.A in Mathematics and a B.S. in Business Management. In 2010 Metzinger obtained the National Strength and Conditioning Association’s certification as a Certified Strength and Conditioning Specialist, and obtained Titleist Performance Institute’s certification as a Certified Golf Fitness Instructor. In 2011 Metzinger earned a Master of Science Degree in Biomechanics from East Carolina University. 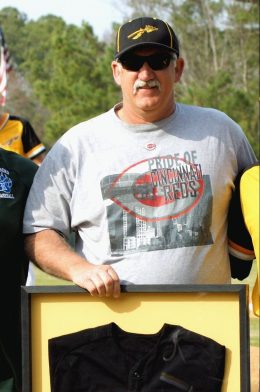 Coach Kenny Meekins has an extensive coaching resume that goes back three decades.  He has had head coaching positions at South Edgecombe Middle School, Princeton High school, and Manteo High School.  Coach Meekins served as a head coach in the Coastal Plain League with the Outer Banks Daredevils. He has also been a head coach of American Legion baseball in Johnston County.  He has an impressive 434-171 record as a head coach.

At Princeton High School from 1988-1994, Coach Meekins won two state titles (1992, 1994).  He also won two conference titles during that time in 1992 and 1993.  Coach Meekins came to Manteo in 1994.  In 1996 Manteo captured the 2A state championship.  During his time at Manteo he won 10 conference titles.  He has won numerous coach of the year awards, along with the Charlie Adams Distinguished Service Award in 2013.  He is a member of the Princeton High School Hall of Fame, and the NCBCA Hall of Fame.

Coach Meekins played at Northeastern High School and threw their first ever no-hitter in 1978.  He went on to play at North Carolina Wesleyan for coach Tony Guzzo where he helped the team advance to the DIII World Series in 1981.  He later played first base and pitched for Atlantic Christian College.  Coach Meekins earned his bachelors degree in Physical Education from Atlantic Christian College. 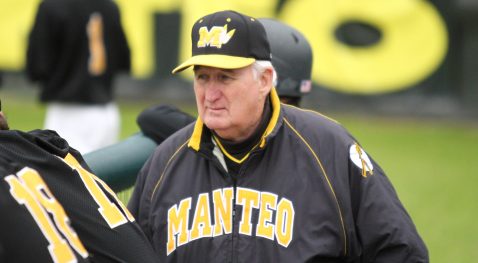 Coach “Pops” Meekins has been a staple in the Redskin’s baseball program for many years, and has been coaching baseball for 31 years total.  He loves to share his knowledge of the game with young players.  He started coaching in 1972 in the Elizabeth City youth 13-15 year old leagues.  In 1974 his team finished second in the state and he was awarded the state runner-up coaches award while coaching a 13 and 14 year old all star team.

In 1989 Coach Meekins retired from state law enforcement and became the assistant baseball coach, to his son Kenny, at Princeton High School.  He continued coaching at Princeton through the 1993 season, and in those five years Princeton captured a state championship.  Princeton also finished as state runner ups in one of his seasons.

In 1994 Coach Meekins moved to Manteo, and alongside William Creef, started a Junior Varsity program at MHS.  In just their first season Creef and Meekins went an undefeated 10-0.  In 1995 Coach Meekins became head assistant for the varsity program and just a year later the Redskins captured the 1996 2A state championship.  Pops remained the varsity assistant until 2012.  During that time he helped guide Manteo to many conference championships.  He is now back with MHS as a bullpen coach and assistant junior varsity coach.